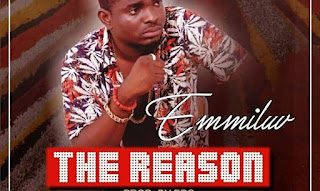 After a few days of the official release of the much anticipated single titled THE REASON By Emmiluv, he has decided to give is ever loving fans a taste and a teaser of the expected full video by releasing the viral video to the general public.
Emmiluv is an Afro singer and songwriter from delta state, Nigeria . The development of his unique style is the result of a lifetime of musical influence. Growing up in a talented musical family where he was always surrounded by different forms of music.
His parents exposed them to a wealth of music as a child, all of which influenced his development.
Emmiluv is keen to point out that everything he listen to directs his musical development in some way.
In a recent interview with the delta born entertainer, he said the world hasnt seen nothing yet. He also review that the #thereason freestyle competition is also set with good price, materials to give out.
Emmiluv new hit that really prove that He his the true music taliban, the song which is titled ‘the reason’ is Produced, mixed/mastered by peace (ppo).
Download Here

Title : [Music] Emmiluv – The Reason
Description : After a few days of the official release of the much anticipated single titled THE REASON By Emmiluv, he has decided to give is ever l...
Rating : 5
Related Posts: Music

0 Response to "[Music] Emmiluv – The Reason"